On 29 December, a fire hit a residential area in Purok 2, Barangay Culiat in Quezon City. It reached fifth alarm and displaced about 100 families.

JAAF handed out family food packs for those affected by the destructive fire on 7 January. Lilibeth Flores and Allen Agudal, whose houses were razed, received the donations on behalf of the affected community. 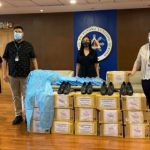