J. Amado Araneta Foundation (JAAF), the social development arm of the Araneta Group, welcomes February 2022 with a special milestone — the 20th year of the foundation (which started in 2002).  Coincidentally, it was also the 115th birth anniversary of the Company’s founder Don Amado Araneta.

To celebrate the special milestones, JAAF kicked off a series of activities at a place that is close to Don Amado’s heart: his birthplace, Bago City in Negros Occidental.

One of the highlights was the turnover a seed donation to the Balay ni Tan Juan Museum for its rehabilitation efforts. Received by museum curator Clem del Castillo, the donation will fund the creation of an audio-visual room to bring it closer to the young generation.

Built in the late 1800s, the museum stands as a typical “BALAY BATO”, an architectural style prevalent in the Philippines during the Spanish Era. It was owned by Natividad Sitchon Palacios, a niece of Juan Anacleto Araneta (or Tan Juan, as he was fondly known). In 1906, Tan Juan offered to buy the house, but Doña Natividad chose to hand it to him instead. He occupied the house as he wanted to live within the poblacion for the remainder of his life.

As historic as the man who occupied the house, the balay now serves as an integral part in the socio-political life of Bago City. The house was first opened as a lifestyle museum in 1996 during the 2nd Araneta Family Reunion. In 2002, it was first recognized as a museum internationally with the guidance of the Swedish African Museum Program (SAMP). In 2004, it was inaugurated as a community museum, the first in Bago City. After its restoration, it houses the legacies and heritage of the Bagonhons.

The donation was part of JAAF’s thrust on preserving parts of the country’s rich historic culture. According to Diane Romero, JAAF Executive Director, discussions about the rehabilitation with Bago City Mayor Nicholas Yulo have begun even before the Pandemic. “JAAF is strengthening our support for Bago City. The rehabilitation of Balay ni Tan Juan Museum is pivotal to this. We hope to continue in helping bring and effect changes to communities, and Bago, where Don Amado is from, is a big part of it,” she mentioned.

Another celebration highlight was the intimate Cocktail Reception at the iconic Bantayan Park which was attended by family, friends, and JAAF Scholars in the City. Don Amado’s granddaughter Margarita Fores, the world-renowned chef behind the Cibo Restaurant chain and a member of the JAAF Board of Directors, was at the helm of cocktail reception. “It’s like giving back to what Wowo Amado and Wowa Esther gave us all our lives. It is coming back to our roots,” she declared.

Dedicated to the vision and legacy of Don Amado, JAAF started as a grant-making organization with his children – Jorge, Judy, and Maria – continuing his philanthropic legacy by extending assistance to disadvantaged individuals, non-profit organizations, religious institutions, and local government units.

For 20 years, JAAF serves as a grant–operating organization with programs focusing on education, culture, arts, and sports development, community development, and religious/ spiritual development. It supports over 200 scholars nationwide; nurtures art and history through the Gateway Gallery in Araneta City; extends emergency relief assistance; provides housing, livelihood and health initiatives for community development; and has made collaborations for holistic development of Filipinos in different parts of the country. 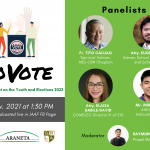 JAAF, GRF, and GRLA, Inc. Work Together for YoVote